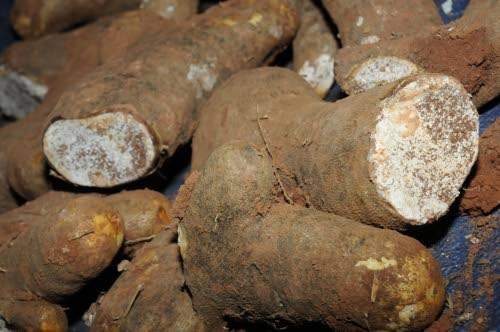 A groundbreaking study into the properties of the Jamaican round-leaf yellow yam has shown that it is effective in killing prostate and breast cancer cells.

The disclosure was made by researcher Sasha-Gay Wright, who is the interim head of the Biomedical Engineering Programme at The University of the West Indies (The UWI).

In the study, which examined the yam to determine the different possible active ingredients, extracts were taken from the uncooked tuber using alcohol. The extract was then tested for its cytotoxicity (ability to kill cells) in using androgen dependent and androgen independent prostate cancer cell lines as well as oestrogen dependent breast cancer cell lines.

“The results showed that the extract had cytotoxic effects in all cell lines. Of note is that the extract was three times more effective in the androgen independent (advanced) prostate cancer cells which is of great significance because this is the one that is more difficult to treat,” Wright said.

“The conclusion of this part of the study is that the yam extract has a dosage-dependent cytotoxic effect on prostate and breast cancer cells.”

What’s more is that Wright’s extract, when tested on non-cancer cells, did not kill them.

“The best part of it is that I tested it on normal cells, and it didn’t kill the normal cells,” she confirmed.

But how could this possible cure for prostate and breast cancer be under our noses for so long? And why is the prevalence of these cancers in Jamaica so high, considering that the yellow yam is a staple in most Jamaican homes?

“The thing is how we prepare it,” Wright answered. “We prepare it by boiling it, but my extract isn’t a water extract. I created an alcoholic extract of the yellow yam,” she clarified.

After making the initial discovery, the researcher journeyed to Southern University in Louisiana, USA, to figure out exactly how the extract kills the cancer cells.

“And I figured that out as well, and that’s what I’m trying to publish in my thesis,” said Wright, who is pursuing a PhD in biochemistry.

Wright plans to complete further studies to determine how the extract works in vivo (in an organism), and possibly introduce the extract in the form of a nutraceutical — a food that provides medicinal or health benefits.

The study is piloted by Wright, and supervised by Professor Helen Asemota, director of the Biotechnology Centre, The UWI, and Dr William Aiken, urologist, the University Hospital of the West Indies. It is being conducted in collaboration with Dr Moji Adeyeye of the National Agency for Food and Drug Administration and Control in Nigeria, and researchers at Sullivan University, Roosevelt University and Southern University. — Candiece Knight. Source…Jamaica Observer